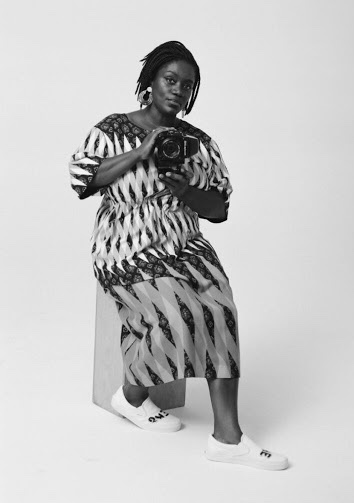 The role of Black women in the popularization of streetwear is undeniable. As both the vision and muse behind some of the most popular trends in streetwear for decades, Black women have made a huge impact on the industry as the originators of street style. Women in hip-hop like Lil’ Kim and Mary J Blige, styled by creative genius Misa Hylton, redefined streetwear with never-before-seen silhouettes and a more feminine take on the style, and they continue to inspire current trends thanks to their iconic looks. Beth Gibbs has also changed the idea of streetwear with her gender-neutral clothing line Bephie and her innovative designs for major brands. These women have played an immense role in influencing street fashion, but are rarely acknowledged for their accomplishments.

Shaniqwa Jarvis, an artist and photographer hailing from New York, is one of the many female visionaries who has influenced streetwear fashion for more than 20 years. Like Hylton and Gibbs, Jarvis is inarguably one of the greats in her field, but her impact is not always recognized. Jarvis’ work boasts a cult following and has been worn by streetwear fanatics and displayed across the globe, but she fails to receive her rightful credit in an industry that has been dominated by male photographers.

“Working and excelling in spaces where you don't typically find Black women is a political statement of its own,” Jarvis said in an interview with Forbes. “I tend to use my voice behind the scenes to advocate for other people of color to be photographed and highlighted in spaces they currently are not in.”

In 2017 Jarvis launched Social Studies, a multi-day pop-up event meant to empower underprivileged youth and connect them with creators in the industry, in a collaborative effort with Baque Creative and Something Special Studios. The experience consists of a series of panels, discussions and workshops led by Jarvis and other creatives on educational topics such as how they reached their success and the importance of Black votes in the 2020 election. Due to the pandemic, these workshops and conversations have taken place online, making them more accessible to a broader audience. Also highlighted on the website is a compilation of books by Black authors, including Jarvis’ sold-out self-titled work which features 160 pages of her photography spanning across her career.

Recently, Jarvis became the first artist to have residence in New York Fashion Week, with an exhibition of her work displayed at Spring Studio during NYFW in 2018. The proceeds from her artwork sales were donated to Harlem School of Arts, where Jarvis used to study. Jarvis’ display featured her photography printed on unique materials, such as cotton, linen, and silk chiffon, to reinforce her concept of the contrast between, “hard and soft,” according to Jarvis.

Inspired by her parents, who were both photographers, Jarvis began taking photos at five years old. Jarvis notes that her 2020 collaboration with Converse, a pair of gender-neutral, high-top Chuck Taylors with a floral image printed on the shoe, was inspired by her father and his suave style.

“I’m always giving props to my mom for all the things that she’s done,” Jarvis said, as reported by Vogue. “But for this collection I thought, let me just give the man his flowers.”

In addition to her profound influence on streetwear, Jarvis continues to use her platform to empower young creatives to explore their passions. Throughout her career, Jarvis has given credit where credit is due, but it’s time that she receives her flowers too.