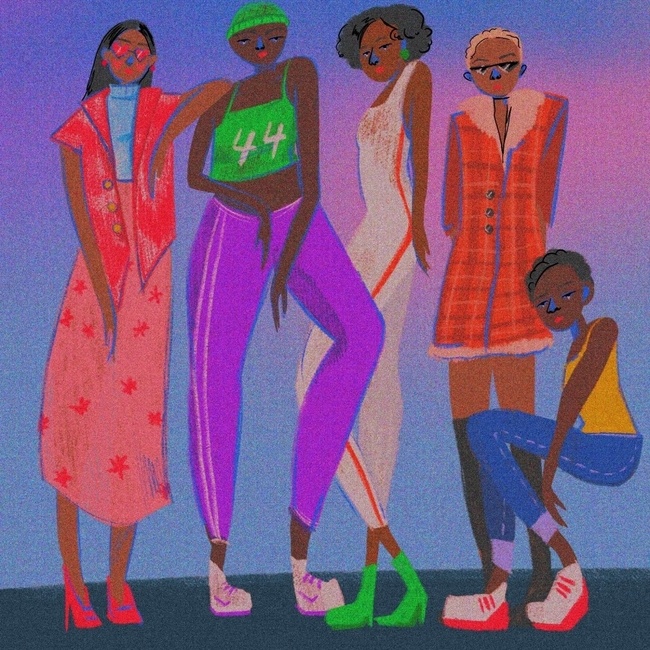 Before fatally shooting 17-year-old Trayvon Martin in 2012, neighborhood watchman George Zimmerman told the 911 dispatcher that the young man in “a dark hoodie, a gray hoodie” was a “suspicious guy.”

Just days after Martin’s death, Geraldo Rivera on the Fox & Friends TV show circumvented justification for Zimmerman’s actions. “The hoodie is as much responsible for Trayvon Martin’s death as George Zimmerman was,” said Rivera, who later told Politico that it is “common sense” for minorities to avoid wearing hoodies. NPR deemed the hoodie the emergent symbol of the people that same year, the clothing item already part of a long-standing discourse about the politics of streetwear.

How does wearing a hoodie pose as a threat? According to Zimmerman and Rivera, the answer is the person wearing it.

Just like any cultural phenomenon, streetwear is a derivation, part of a broader change that gave control to mass culture involving fashion, music, and art. It’s a movement shaped by Black culture. With the recent rise in media attention surrounding Black Lives Matter protests and the unjust killings of George Floyd, Breonna Taylor, and Elijah McClain, it’s become more important than ever to educate ourselves on the history of streetwear. We have to recognize the double standard between POC and white people when it comes to the fashion industry.

Streetwear emerged in the 1980s. It was a result of the ‘50s and ‘60s, when the hip-hop genre was born amidst Bronx street gang culture. By the 1970s, gangs had established their turf; this was the backdrop of the frontier where hip-hop took root and flourished. The music gradually spread downtown, flowing into Brooklyn and, in the ensuing decades, to the rest of the world. The first successful commercial rap single, Sugar Hill Gang’s “Rapper’s Delight,” was our first taste of the fashion movement to come.

The young POC that brought the world streetwear were the same people to experience the systemic injustice of President Reagan’s War on Drugs. This criminalization of drugs in various American cities led to the mass incarceration of Black and Latino men, since crack was readily available in urban centers. The music of the marginalized reflected the political backlash against Nancy Reagan’s Just Say No to Drugs campaign.

FIT professor and luxury branding consultant Shawn Grain Carter experienced this change firsthand when she was a student at the University of Virginia, working for the college’s radio station. “That year [1979] was the turning point where you saw this new emerging sound coming out of rhythm and blues, and it was rap music,” said Carter. “So the clothing that young people wore, Black and white, was clothing that reflected this new music.”

In other words, there’s a distinct connection between music started by Black and brown communities and the commodification of street style. According to Carter, whose entire career has been on the business side of fashion, “The history of what I call urban, cool, Black casual wear goes back to the history of rap music, which morphed into hip-hop music. They’re intertwined because fashion—like music—is an artistic expression of identity, so it has always been both cultural and political.” Streetwear didn’t emerge in a vacuum; to understand its history, therefore, is to understand its underlying sound.

By the mid-1990s, hip-hop brands had entered specialty shops and department stores throughout the United States. Ever since then, the fashion movement has grown exponentially. Last year, PricewaterhouseCoopers’s global consulting team estimated the size of the global streetwear market at $185 billion by sales, making it by some estimates about 10% of the entire global apparel and footwear market. Out of this market, almost 80% of global consumersresponded that they felt the Supreme brand represented streetwear to them the most. Nike, Off-White, and Adidas also scored highly among consumers.

Out of these four brands, only one has been headed by a Black CEO, stressing the point of  contingency on representation and questions of appropriation. “Streetwear is so huge now and it’s extremely white and male-dominated in so many ways, even though it has its cultural roots in Blackness,” said Yasmine Barboza, 20, designer and founder of the clothing brand Fooghou. “I think that what fashion companies are doing is almost co-opting that word and co-opting the style, and immediately tying it to the Blackness that makes it cool.”

Barboza’s claims are only further reinforced by the media’s words, or, rather, lack thereof. Reputable news sources like The New York Times, Who What Wear, and GQ primarily attribute the movement’s success to the brands Supreme and Stussy. While it’s true Supreme and Stussy (as well as other high-fashion brands like Vetements and Louis Vuitton) have made a significant impact in further popularizing the term “streetwear,” all of these articles omit that it was America’s Black diaspora which pioneered streetwear’s essence. Erasure? Maybe. Well, maybe more than maybe.

Bucket hats. Oversized clothing. Scripted necklaces. Hoop earrings. Sneaker culture. Logomania. All of these trends, all of these things both you and I wear, can be traced back to Black and brown communities.

Fellow designer and fashion merchandising student Sainabou Lowe, 22, was quick to underline the need for the masses to acknowledge the origins of these trends. “People should pay attention to streetwear’s history because I feel like when we learn about Black history in America, so much of it’s negative. It’s important that we shine a light on all the positive, popular things that Black people have brought to this world.”

This isn’t to say that streetwear only belongs to Black people or that Black people are monolithic in their style. After all, streetwear’s mission is to create a sense of belonging whilst going against tradition and conformity. The movement is a testament to authenticity itself as it is a result of the people, a subversion of the top-down nature of the fashion industry, producing a democracy unlike any other.

A byproduct of this democratization is its anti-gatekeeping mentality, which has led to the flourishing online streetwear community. In fact, as of last year, 31.7% of global consumers stated that they took their streetwear style inspiration from social media influencers. As one of those influencers, Kevin Waugh, 25, stresses the inclusivity inherently tied to street style. “I didn’t go into this with the intention of being an influencer,” he confessed. “I was just looking to express myself, and I want people to know that streetwear is for everyone who’s looking to genuinely put themselves out there.”

It is this very authenticity which makes it important to support Black creators, especially those lesser known. “It’s not large companies that create creative streetwear. What it really comes down to are these grassroot, ground-up individuals. That’s really where the seeds of culture are, and it’s so important—in that seed—to have more Black and brown people. I think we don’t because, ultimately, the ideal is still white.”

To put it simply, Black culture isn’t a mere component of streetwear but its cornerstone. To give it the proper recognition, respect, and representation it deserves, we must first give its people proper recognition, respect, and representation. The omission of streetwear’s history is what has thus far propagated the reassignment of streetwear’s high fashion market. In other words, it is now used to appraise white individuals rather than uplift their black counterparts.

For years America has refused to swallow this bitter pill of its own shortcomings, but now—more than ever—is the time to do so. “It’s a very critical conversation now because no one should be killed because they’re wearing a hoodie like Trayvon Martin,” declared Carter. “Black America has had enough.”

So you there, wearing your hoodie while reading this—swallow this pill if you really care about #BlackLivesMatter.